[In April 2014 the board of the UU Fellowship of Stanislaus County proposed a bylaw change. If you are not a member, this particular essay will be of little interest to you.] 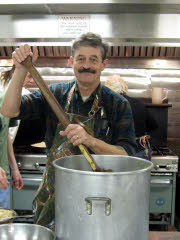 The board has a proposed bylaw change. Essentially, it limits voting membership to those who pledge at least enough to cover their PCD and UUA dues, currently total $88 per person. The idea is that those who pledge generously shouldn't have to carry those who do not.

The more I think about this change the less I like it. I'm writing as one who has carried, and has been carried.

My pledge was confidential until last December, when I spoke about Sex, Money, and Beets. You can look it up. If your pledge is less, I'm carrying you.

Some of you come early on Sunday to set up, or stay late to clean up. I don't. Marily, Pat, Leroy, Aynslie and Phyllis (and some others, but those are the most faithful) are carrying the rest of us.

We have an enviable reputation at the Salvation Army Shelter; we're the "Seven Course Meal" people. Some of you bake brownies or Christmas cookies; some fry bacon or cook mashed potatoes. You are carrying those who don't do anything. Some of you spend four hours preparing the meal or four hours serving it. You are carrying more. I can guarantee you that Bill, Aynslie and Adlai are carrying more than anyone else; they start the week before and don't finish until all the pots are washed, dried and put away the day after the meal.

Look inside the front cover of your grey hymnal, the next time you come to Sunday Services. Three times out of four, someone donated it to the fellowship. If you've never donated one, we're carrying you. I'm carrying everyone for the teal hymnals, but you have to say the name aloud, think a bit and ask yourself who loves puns to figure it out.

Children's Religious Education is vital if we're going to attract families with children. If you teach on a regular basis, you're carrying the rest of us.

Day Timers, Covenant Groups, the Spiritual Support group and Explorations in Art all provide a way for people to connect. Connected people build strong congregations. If you participate, you are carrying the rest of us. If you've spoken to one of the groups, or found a speaker, you are carrying more.

Jim Sparkman leads a small group to spruce up the buildings and grounds every couple of months. If you are in that group, you are carrying us. Bob Santos comes out by himself to fix things almost every week. He is carrying us.

Carol Lackey keeps the kitchen straight. Aynslie buys supplies when we run out. They are carrying the rest of us.

This isn't a complete list. I don't know everything that goes on in the fellowship. It is long enough to make my point. We carry each other. That's one damn good definition of "Fellowship".

I suggested, in the homily above, that people who could not pledge enough to cover their dues might want to choose to remain "friends", instead of becoming members. I've changed my mind. Not being able to vote makes you a second-class citizen, whether you choose to do so or the bylaws force you to do so.

There is a provision in the proposed bylaw that lets poor people ask the minister for a dispensation. To have them have to ask the minister for a special favor is distasteful to me; too much like the scene in "Oliver Twist" where Oliver asks "More, sir?" while the rest of the orphans look on, aghast. It would make a hypocrite of every board member who says "You are welcome here if you are dirt poor or filthy rich . . ." . "Welcome" means just that; welcome to sit at our table and be treated just like everyone else, no matter what your size, shape, color, age, gender, number of functioning limbs, sexual orientation . . . or income.

We should respect the worth and dignity of every person. Even the poor ones.

I was thinking this morning about how that makes me feel to contribute more than others. For some people, I'm glad to help, and I feel about the same as I do when a short person asks me to reach something from a high shelf, or a little old lady asks me to carry something too heavy for her; they aren't able to pledge a lot, I am, and it's no big deal. There are others, who drive newer cars than I do and dress better than I do*, who pledge less. I put up with them, the way the rest of the congregation puts up with my puns and the fact I don't change my socks every day.

*Since I drive a 1985 Volvo the first isn't hard. Since I don't replace a pair pants of unless the holes in the knee are bigger than a dime, and usually get a second day out of a shirt even if it has a small food stain, the second isn't either.

[This is one of my Miscellaneous Essays. There are more; you may enjoy another section of my web site, too:]